In our quest to win a million dollars, we're trying to Index the Human Genome. A typical index, like in the back of a book, is composed of an entry, say "Sheep", and a list of page numbers, say "88,121,265". But when we went to try this idea on the 3,000,000,000 characters in the genome, we found that it took up significantly more space than the genome itself, which was unworkable. Surely we can find a more efficient solution to the problem. (Or, we could throw up our hands, call it "Big Data", and put a supercomputer to work on it. Let's not do that.) 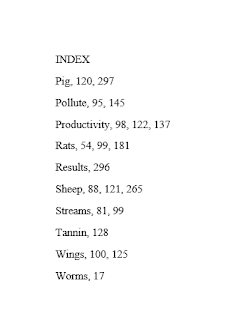 Actually, there's a fair amount of redundancy in an index. If there are three instances of the word "Sheep" in our book, and we add a fourth instance of it to the index, we're increased the number of sheep, so to speak, by 33%. If we do that for every word in the book we'll add a significant chunk to the overall size.

But suppose, rather than just give the user the page numbers where the word "Sheep" is, we provided them with with the line and word numbers as well. "Sheep" is on page 88, line 14, word six. Now, the index is in alphabetical order of course, so what we can do is simply eliminate all those redundant words from the index. So the index entry for "Sheep" would just say "88,14,6". Say readers want to find the word "Streams". They would go and find an entry "88,14,6" and look up the word in the book. Finding that it's "Sheep", they realize the word is later in the index, since "Streams" is alphabetically after "Sheep". They go to the next entry in the index, maybe "81,19,11", and look up that word in the book. It's "Streams", so they've found their word, and the index didn't require any of those annoying, redundant words in it!

OK, not a very simple operation for a human reader. But easy enough for a computer. And since our genome doesn't have pages or lines, we could simply record the location of each individual 20-mer and put the locations in alphabetical order. We can even take it one step further: since 20 is just an arbitrary length that we chose, we'll remove it from the solution and just say that we'll take as many characters as we need to get a unique ordering of all of the strings. Notice that you might need to take all of the remaining characters of the genome to alphabetize it correctly, and if you do, you have a suffix of the genome. If you don't need all the characters, it doesn't matter if you add them or not, so you might as well, and therefore we have an array of the suffixes of the genome. A suffix array.

I won't go into the details of how to create such an index right now, but it can be done in relatively few lines of code. (One easy-to-use library is called SAIS.) Now, the simplest way to write out a suffix array is a text file of the alphabetized suffix indices, in ASCII format, one number per line. This, unfortunately, brings us straight back to the size problem - let's say eight bytes on average, per line, with one line per character in the genome, and we end up with 24 gigabytes worth of index. But at least it's a workable index. If we split the index into several files to keep it manageable, it even suggests a refinement of our attack on the overall problem. We'll see how another time.

(Update: I wrote an article on suffix array algorithms.)

Posted by Ben Fulton at 6:37 PM
Email ThisBlogThis!Share to TwitterShare to FacebookShare to Pinterest